Comentário do usuário
Welcome, all you typography veterans and fans to my DaFont foundry. Let me give you an introduction to myself. The name is Dan P. Lyons, also known as Daniel Lyons Entertainment [DLE for short] - not only do I specialize in typography, but I also specialize in animation, multimedia, and other sorts of content imaginable. It has been my dream to be a type designer since I was at the age of eleven, and a few years later I began to improve my type designing skills, and as it continues, it began to grow more and more accurate. Let me tell you a story about how much of a font fan I come off to be - and I'm not hesitant to reveal it.

Ever since I was around eight to nine years old, my favorite font used to be "Cooper Black" of all fonts I used to be obsessed with around the time - and I thought the font I was typing with was referred to as simply "text". And then months later, [pretty much] when I and my mother were printing out a multiplication table, I still referred to a font as "text", until my mother asked me what font do I want to use for the text seen in the multiplication table. That's when I began to realize that a text is implemented using a font of all things. And then the next year [when I was 10 years old], I discovered something that made glyphs of various fonts to make such an elegant display - which technically signifies the inclusion of swashes and other OpenType features. Other fonts that I discovered with these inclusions consist of Champion Script Pro, Rock n' Cola, Caslon Swash, Garamond Swash, and a variety of Hebrew fonts coming from Masterfont [by the time I was into the Hebrew language and culture.] Then yet the year after that, after discovering all the mentioned fonts that one smile curled up on my face, it all led me to dream about being a type designer once and for all. Before I actually began to, I've been designing concepts of how it would pay off - say for example I've been doing lettering with a calligraphy pen [knowing that I've been wanting to do calligraphy after looking through Hamid Reza Ebrahimi's videos] alongside with felt tip pens, markers, etc. I even made letterforms that are in the style of many wordmarks like HBO Family, [the Family wordmark], Lifetime from 2008, Nickelodeon from 2009, etc. I even made my own logotype which is named "Ursula", which is supposed to represent something you'd see in outer space in a crafted form. The color of the mentioned logotype that I created was meant to be purple, and then days or weeks later I transformed the logotype into an actual font - in which I extended it even further with many coverages in the unregistered version of the program which I will save for the next part. Admittedly, I was a bit ambitious when I proceed with it. I don't know what it means or why that is, but still. And then I discovered a Litebulb font WIP concept from LDEJRuff a.k.a DecaTilde. [He was LDEJRuff at the time the concept was created.] I've been wanting to obtain a TTF file of the Litebulb font, but somehow it wasn't of any use. However, the font I managed to obtain was the Super Mario Script 3 font. I was extremely eager to obtain that ever since I discovered it in New Super Mario Bros. Wii. And then - finally, I've been able to get the registered version of FontCreator on Christmas 2011. However, I've used that same program for the same revealed purpose I mentioned before during the time it was unregistered. Then with the registered version of that program, I started to make logotypes out of Nickelodeon 2009 (Litebulb from LDEJRuff/DecaTilde) and pretty much an early version of Toys R Us. By the time I started to make those fonts, they...weren't really accurate enough. They were pretty much blurry and the contours just didn't look right.

Now keep in mind, all the fonts that I made in 2011 were in-house the whole time - and then they were lost in 2013 when my Windows Vista computer has been constantly acting up in the end - before we had to get a new Windows XP computer.

And that's pretty much the story of how I've come to not only be a font fan - but to come off as a typographic designer. So let's get down to "today" business. Continuing from my casual introduction, I run the perfect type foundry that goes by the name "LyonsType". It's the name that I wanted to stick with for a while - and it paid off when the first LyonsType font went by the name of "Reponse" [French for response]. And then there are more that are available for 100% free download such as Crafted, Internet, Amber, Bulletin, etc. With all that out of the way, LyonsType offers a satisfactory library of fonts that are free to use - and with them, you can optionally give me credit for when you use these certain fonts. No donations required. Feel free to download and enjoy. 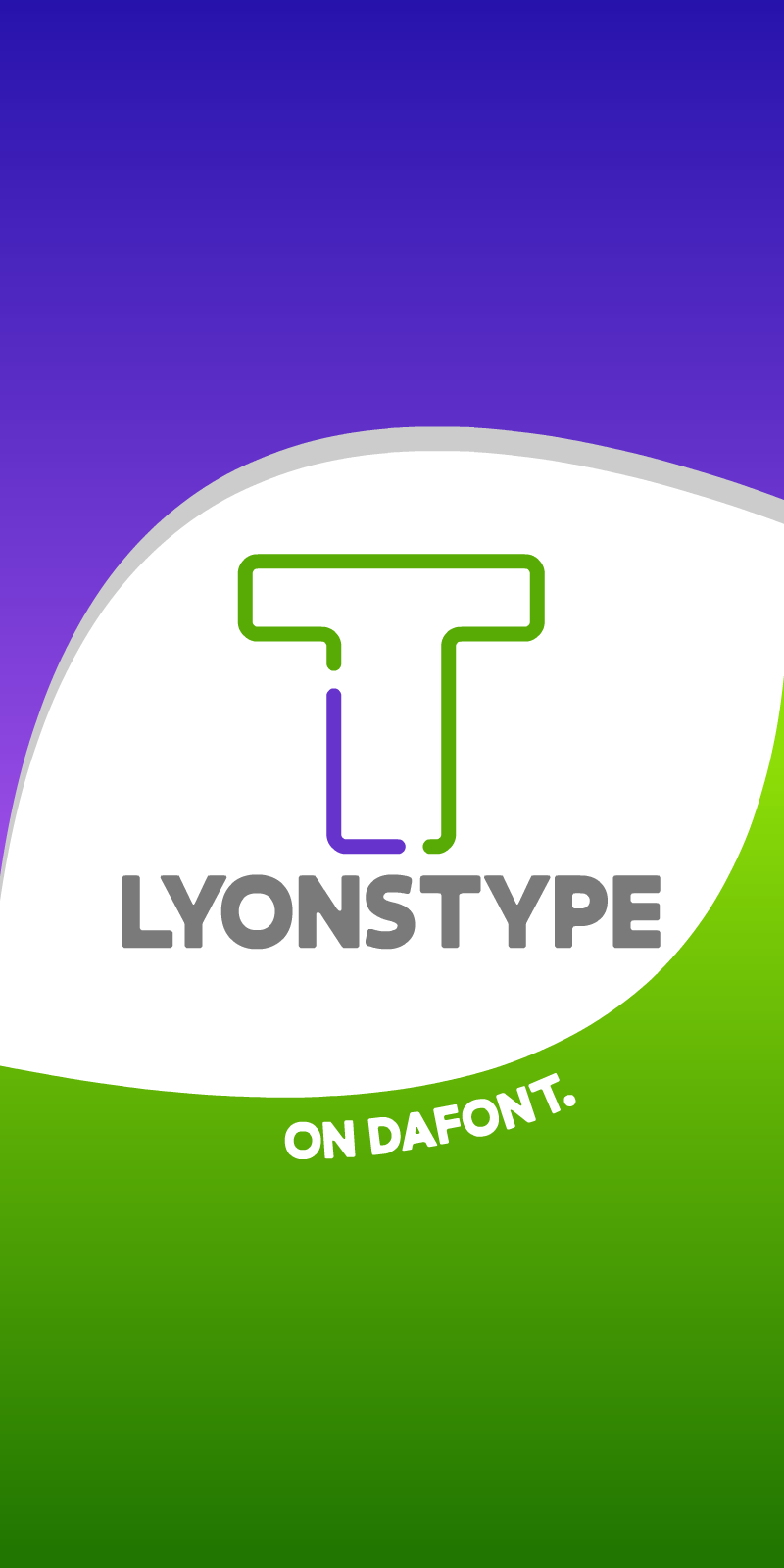