dans Techno > Divers
39 921 téléchargements (8 hier)   100% Gratuit - 2 fichiers
TéléchargerFaire don à l'auteur
karma future.otfkarma suture.otf
Note de l'auteur
Karma is a pixel font inspired by the 12×16 raster font which was included with Windows 3.1. The original raster font was monospaced but Karma is kerned and proportionally spaced. Stylistic changes were made, particularly with the accents and symbols. The vertical space has been adjusted to allow for upper and lower accents. Language coverage has been expanded to cover most Latin-based languages. There are OpenType features for fractions and numeric ordinals. Included is an outline/shadow variation which doesn't include the OpenType features. Use Karma when you want to convey a classic Microsoft Windows vibe without the disadvantages of dealing with old font formats and monospacing. These fonts include a license that allows free commercial use: sometimes referred to as a desktop license. This allows you to install the fonts on a computer and use them to create posters, web graphics, game graphics, t-shirts, eBooks, videos, signs, logos and more. Read the license agreement for details. If you'd like to embed these fonts in an app, on the web or anything that's not covered by the desktop license agreement, visit the link below. You'll find distributors who offer several types of licenses, or you can contact me for help.
https://typodermicfonts.com/karma/
Mise en ligne sur DaFont : 26/02/2005 - Mise à jour : 23/02/2022 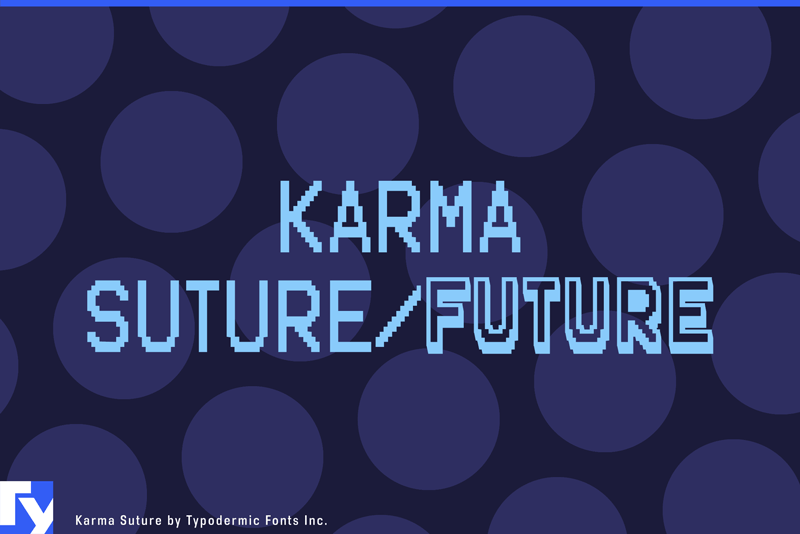