en Básico > Sans serif
3.340.101 descargas (583 ayer)   41 comentarios   100% Gratis - 7 ficheros
Descargar Donar al autor
steelfish rg.otfsteelfish bd.otfsteelfish eb.otfsteelfish rg it.otfsteelfish bd it.otfsteelfish eb it.otfsteelfish outline.otf
Nota del autor
Steelfish is a condensed typefacean ad hoc design inspired by early to mid-20th Century newspaper headlines. Rather than being modeled after one specific metal type, Steelfish is an aggregate of many headline font sources. The original cuts of Steelfish were released in 2001, then updated and expanded in the early 2010's. This modernization refined the look, expanded languages, added more weights and turned Steelfish into brawny web headliner. Steelfish avoids modern-day stylistic touches and antique ornamentation, allowing it to swim stealthily through historical and contemporary themes. Almost all current Latin alphabet-based languages are supported as well as Greek and Cyrillic. These fonts include a license that allows free commercial use: sometimes referred to as a desktop license. This allows you to install the fonts on a computer and use them to create posters, web graphics, game graphics, t-shirts, videos, eBooks, signs, logos and more. Read the license agreement for details. If you'd like to embed these fonts in an app, on the web or anything that's not covered by the desktop license agreement, visit the link below. You'll find distributors who offer different types of licenses, or you can contact me for help.
https://typodermicfonts.com/steelfish-web-headline-fonts-7-free-styles
These free fonts are part of a larger font family. Check out the rest of the family through the link above. 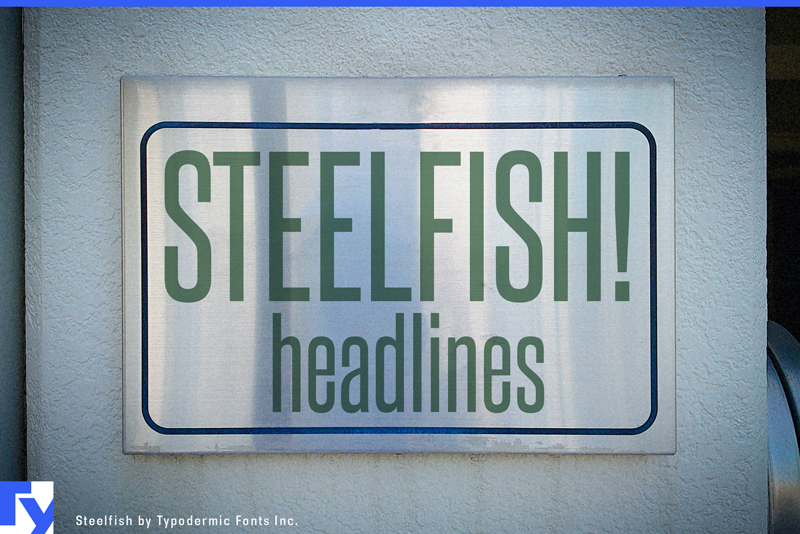