en Gótico > Moderno
11.213 descargas (4 ayer)   Gratis para uso personal
Descargar Donar al autor
Pena-Caldaria-demo-ffp.ttf
Nota del autor
Pena Calvaria is a decorative and condensed Gothic typeface of intermediate style between the Blackletter and the Fraktur style, it is a very expressive typeface due to the pen finials and the carefully made interior curves that give a contemporary look to a style of fonts that five centuries after his birth they are still topical.
Pena Calvaria owes its name to the so-called Ordalía del Agua and completes a series of 3 fonts dedicated to this concept: Ordeal, Farisea and Pena Calvaria

On this occasion I offer 2 versions of the typography at the price of one: Regular & Shadow with 642 glyphs and support for all the languages derived from Latin.
============
FULL VERSIONS & COMMERCIAL LICENSES: https://defharo.com/fonts/pena-caldaria-ghotic/ 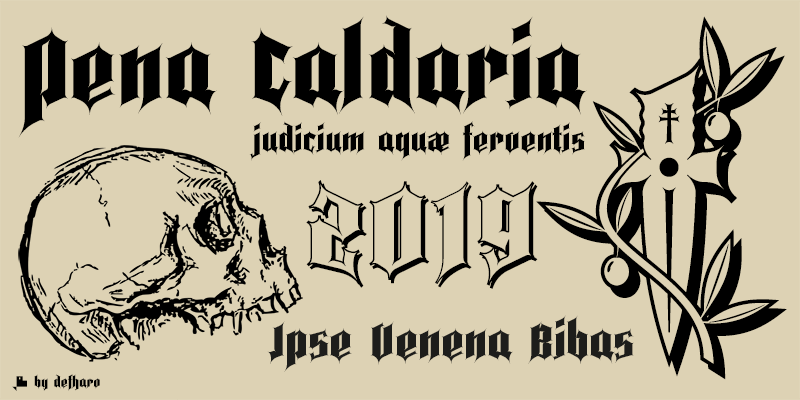