Ad by Lee Batchelor
8 matching requests on the forum

in Script > School
418,278 downloads (33 yesterday)   12 comments   Donationware - 2 font files
Download Donate to author
5thgradecursive-2-italic.ttf5thgradecursive-2.ttf
Note of the author
My font is free to use in any way as long as it follows the guidelines outlined by the attribution-sharealike creative commons license (http://creativecommons.org/licenses/by-sa/3.0/) which basically means it's free to use in any way except selling it under a different name/license.

If, however, you would like to show your appreciation for my work, I do have a donation link. I would also love nothing more than to see what you've done with my font. 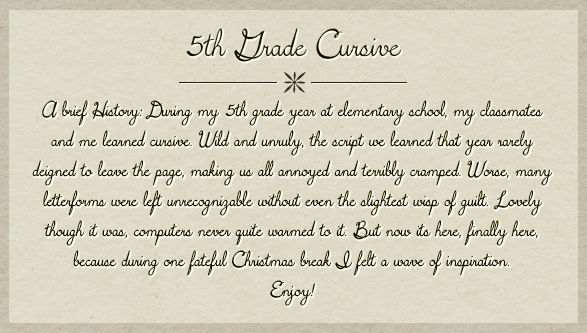